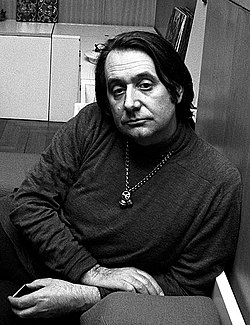 The Italian architect Ettore Sottsass (1917-2007) lived for ninety years, working as an architect, industrial designer, painter, publisher, photographer, jeweller, theorist and ceramicist. Sottsass has left countless works behind-private villas, an airport in Milan, boutique interiors and a vast range of large and small decorative objects, from expensive tableware to office furniture.
Ettore Sottsass became famous in 1958 when he designed the first Italian computer, the Elea 9003, for Olivetti. To make it easily manageable and understandable, the author arranged the elements using colour, for which he received the Compasso Dorro award. The popularity of his red-orange typewriter Valentine, of the same brand, can now be compared with an iPod or iPad. The Valentine typewriter became a design icon and one of the pieces is now kept in New Yorks Museum of Modern Art.
The designers obsession with bright colours, a variety of tones and unconventional combinations that formed Sottsass trademark emerged after his first trip to India in 1961. He was fascinated by the multicoloured traditional costumes of the locals and the liberty with which even the least well-off Indians decorated themselves. He was the first to decorate furniture with coloured laminates, and also designed furniture in neon-coloured fibreglass. These experiments with colour radically changed the style of his work, placing Ettore Sottsass work in the category of radical design, which he focused on promoting until the end of his career.
In 1980, Ettore founded his own studio, Sottsass Associati, and in 1981 he founded and headed the Memphis design group, which made him famous all over the world. Apart from Sottsass, Memphis included architects, designers and artists such as Andrea Branzi, Michele de Lucchi, Matteo Thun, Martin Bedan and others. Memphis embodied all the themes that Sottsass experimented with from the mid-1960s onwards: bright colours, kitsch and cheap materials. Memphis debuted in 1981 at the Salone del Mobile international furniture exhibition in Milan. This time they captured the attention not only of design experts, but also the media, and the Memphis groups concepts were proclaimed the design of the future. The eccentric, character-driven sculptural objects were no less in demand than the finely tuned objects of the Art Nouveau era. Sottsass thus successfully disproved the most famous modernist postulate form follows function. For young designers at the time, it was an intellectual breakthrough that freed them from the usual concepts of rationalism, allowing them to try a more flexible and conceptual approach to design.
Over time, the radical style or anti-design, pioneered by Ettore Sottsasss group, became the most influential trend in world design. Memphis designs, including the famous Carlton and Suvretta shelving units, the Tawaraya and the Brazil table, have been exhibited all over the world and are still important pieces of art in major museums today. Memphis devoted fans included the likes of Karl Lagerfeld, Sofia Coppola and David Bowie. Memphis existed from 1981 to 1988 and Sottsass, after the group broke up, focused on developing Sottsass Associati-it still operates to this day and works with Apple, NTT, Philips and Siemens amongst others.