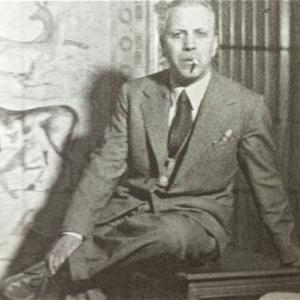 At the beginning of his career, Paolo Buffa (1903-1970) worked in the architectural firm of Gio Ponti and Emilio Lancia. In 1928, Buffa opened his own firm together with architect Cassi Ramelli. They created elegant furniture in keeping with the neoclassical style which was fashionable at the time. By the 1930s Buffa had widened his profile, becoming involved in the interior design of shops, bars and also private homes in Milan.
The architects success led to an invitation to international projects. In the 1940s Buffa collaborated with Mario Quarti on the design of the King Zoca Palace in Albania, and was also involved in an extensive series of projects in the Americas. In the 1950s he added the interiors for the branches of the Istituto Bancario Italiano and the Banca Provinciale Lombarda to his list of major projects.
Buffa has participated in many important industrial exhibitions during his career, including the Triennali di Milano, Le Salon des artistes decorateurs (SAD) and ENAPI. The designers work is characterised by its superb quality, both in terms of architectural design and execution.