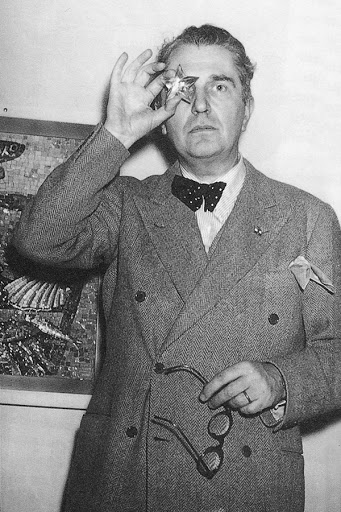 Pietro Chiesa (1892-1948) was a leading Italian Modernist and Art Deco designer best known for his artistic glass furnishing pieces. He belonged to the Swiss Ticino family of artists. He studied at the Accademia di Belle Arti di Brera, and then trained as an apprentice at the studio of furniture designer Giovanni Battista Gianotti. In 1921, he opened his own studio in Milan, the Bottega di Pietro Chiesa, and showcased his work at the seminal 1925 Paris Exposition. While running the Bottega di Pietro Chiesa, he also completed some major projects, such as designing and crafting the windows for the Trieste Stock Exchange and those for the ocean liner Conte di Savoia.
In 1925, he exhibited his works for the first time at the Exposition Internationale des Arts Decoratifs et Industriels Modernes in Paris. In 1927, Chiesa partnered with a number of prominent Milanese architects and designers, including Michele Marelli, Gio Ponti, Emilio Lancia, and Paolo Venini, to cofound “Il Labirinto”, which was a collaborative effort that produced highly creative furnishings in a style that came to be known as the Novecento.
In 1932, Gio Ponti approached Pietro Chiesa to join him and Luigi Fontana—who were partners of Luigi Fontana SA, one of the largest manufacturers of stained-glass products in Italy–to become the company’s artistic director. In 1933, Pietro Chiesa merged the Bottega di Pietro Chiesa with Luigi Fontana SA, and together, Chiesa, Luigi Fontana, and Gio Ponti formed Fontana Arte which specialized in furniture, lighting, glass windows, and furnishing accessories.
It was during Chiesa’s tenure as artistic director of Fontana Arte that he created hundreds of extremely creative pieces—all bearing his imprimatur of the highest excellence in glass craftsmanship and the techniques he applied to modern materials. His most well-known pieces include the Fontana table, which was made from a single band of bent clear glass; the Cartoccio vase; and the lacquered brass Luminator floor lamp. Despite the obvious modernity of most of his pieces, one can see how Chiesa was influenced by the classical forms. He also created what would become Fontana Arte’s signature colours of the time, deep blue and green, which Chiesa integrated successfully into many of his creations.
Pietro Chiesa remained artistic director of Fontana Arte, until his unexpected death in Paris in 1948, and his artistic impact deeply influenced Max Ingrand, who became artistic director of Fontana Arte after Pietro Chiesa.